New Mexico is now one of four Western states that, together, have formally entered the race to win up to $1.25 billion in federal funding to build a regional “hydrogen hub.”

In February, New Mexico partnered with Colorado, Utah and Wyoming to form a collaborative initiative to jointly compete for a slice of some $7 billion in funding included in President Joe Biden’s bipartisan infrastructure law, approved by Congress last year, to build out hydrogen hubs across the country. And on Nov. 4, the four members of the new “Western Inter-State Hydrogen Hub,” or WISHH, submitted a “concept paper” outlining their regional proposal to the U.S. Department of Energy, which is managing the competitive grant process to award up to $1.25 billion for each of six to 10 projects around the nation.

Submission of concept papers, which were due by Nov. 7 to compete in this initial round of funding, marks the first step in DOE’s selection process. The current competition is expected to culminate in mid-to-late 2023 with federal backing for at least four hydrogen hubs to start.

The DOE will now select, by December, the most promising candidates to move onto the next stage, said Mark Roper, division director at the New Mexico Economic Development Department. 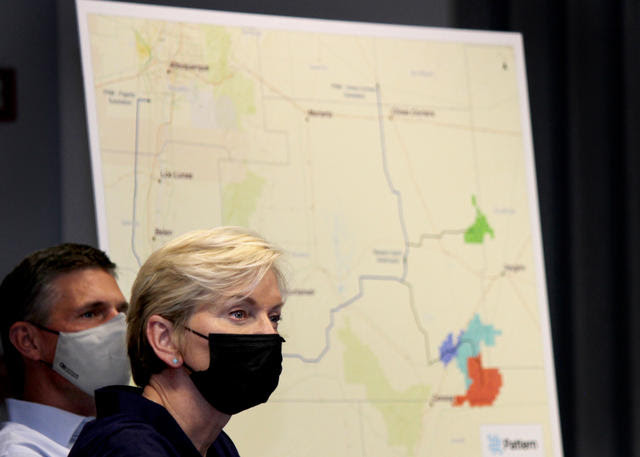 “Before January, the federal government will grant a certain number of applicants permission to proceed with a full application,” Roper said. “… We’re bullish about being included on that short list. We believe we’ll be one of the places down-selected.”

If invited to proceed, WISHH would submit an in-depth proposal to the DOE by April 7 detailing all aspects of the regional hub proposal, with grant awards likely approved by third-quarter 2023, Roper said.

The DOE formally opened the current competition in September. It also released guidance on priorities it will seek in grant applications, such as technological diversity in hydrogen production. That includes funding for at least one hub that derives hydrogen from fossil fuels like natural gas, another that’s based on renewables like solar and wind, and a third focused on nuclear energy.

In addition, DOE wants projects to demonstrate different end-use applications for hard-to-decarbonize sectors, such as heavy industrial processes where hydrogen can be substituted for fossil fuels, or in long-haul shipping with tractor trailers and on rail lines and ships. And it wants geographical diversity in production, storage and end-use.

The Biden administration considers hydrogen as a clean-burning fuel to be a critical component in the government’s goal to achieve a carbon-free electric grid by 2035, and economy-wide net-zero emissions by 2050, said Energy Secretary Jennifer Granholm.

“This national hydrogen strategy will help us accelerate the development and deployment of technologies to realize the full potential of clean hydrogen energy for generations to come,” Granholm said in a statement.

But the push to build a hydrogen economy is riddled with controversy, because many environmental groups oppose using natural gas as a feedstock, whereby hydrogen molecules are extracted from methane in a process that emits substantial carbon dioxide. To contain those emissions, industry plans to use carbon capture and sequestration technology to catch CO2 and bury it underground – a process environmentalists say is commercially unproven and dubious in its ability to significantly lower, much less eliminate, carbon emissions.

“We need to separate the ‘happy talk’ from the real benefits being sold to promote hydrogen,” Singer told the Journal.

The local environmental community is closely following WISHH and DOE’s funding process. But so far, little information on the regional initiative is available, with limited community engagement, Singer said. The new concept paper, for example, is not yet publicly available. 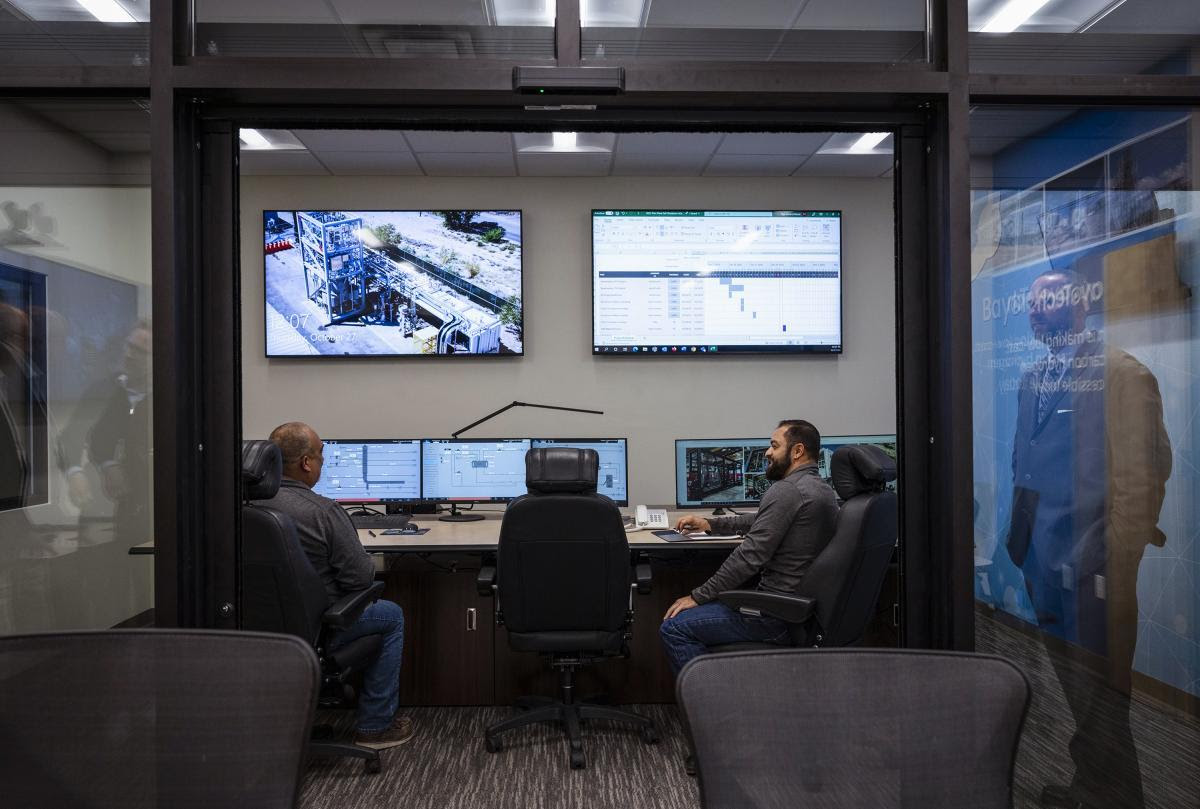 Francisco Martinez, plant operator and technician, left, and Justin Yanez, plant operator, work in October inside a control room at BayoTech’s Albuquerque headquarters, where the company plans to remotely operate and monitor multiple hydrogen hubs around the country. New Mexico and its regional partners are stepping up efforts to secure federal funding to build their own hydrogen hub. (Chancey Bush/Albuquerque Journal)

“There’s been zero community involvement,” Singer said. “None of the groups I work with have heard from state agencies or WISHH contractors about the strategies or individual projects being considered. We’re all in the dark.”

For one thing, EDD will soon release the WISHH concept paper after redacting certain specifics, like company names on projects, followed by public engagement.

“We’ll meet with communities all over,” Greenberg told the Journal. “… We need to do more outreach to educate the public on opportunities in the hydrogen economy.”

The concept paper itself only identifies about a half dozen large hydrogen projects, since DOE limited that initial application to 20 pages. But WISHH received more than 100 responses to a “request for expression of interest” published last August.

“We’ll reach out now to all those companies to develop a road map for participation going forward,” Greenberg said.

Workforce development is also a major part of the WISHH strategy, outlined in the concept paper, Greenberg said.

“We want to create career pathways for people in the hydrogen economy to provide safe, secure, dependable jobs,” he said.

Oct 11 2022
The City of Gallup and the Greater Gallup Economic Development Corporation (GGEDC) seek a conversation with business owners who import goods from abroad in support of efforts to establish the Gallup Municipal Airport as a User Fee Airport and Foreign-Trade Zone, which will provide a US Customs and Border Protectio...Continue Reading