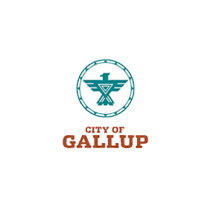 In 1880, a paymaster for the Atlantic and Pacific Railroad, David L. Gallup, established headquarters along the construction right-of-way of the southern transcontinental route. The railroad workers began "going to Gallup" to get their pay; thus a town was born and named in 1881.

Europeans, Asians, and Mexicans came to build the railroad, and many stayed on to mine coal. But, these Gallup pioneers were all newcomers themselves, because when the Spanish Conquistadors arrived in the region in 1540, they found the Navajos, who were new migrants, and the Acoma, Hopi, and Zuni Pueblo Indians, whose occupation extends back to antiquity. Descendants of all these people contribute to the unique ethnic mix of the area.

In the early days, Gallup was a typical, western frontier town, but comparatively quiet by most standards. There were occasional, minor Indian uprisings, but the soldiers of nearby Fort Wingate were able to discourage any major attacks. Most of the citizens carried arms until a law in 1896 limited that practice.

Today, Gallup is the home to about 20,000 people, and serves as a trading area for more than six times that number. The City serves a steady stream of travelers who come to see some of the most unique and interesting wonders of the American Southwest. It is also the hub of "AMERICA'S LARGEST COTTAGE INDUSTRY" -- Indian Arts and Crafts. While a modern trade and tourism center, Gallup still retains its spirit of a frontier community, with a unique cultural diversity found nowhere else.