“One of the ways BNSF works to ensure the right solution is offered to each customer is by scouting potential sites for development in advance of customer inquiries,” said Colby Tanner, assistant vice president, Economic Development. “By doing the upfront leg work to confirm a site is rail-served and shovel-ready, BNSF’s Site Certification Program creates significant value for customers by accelerating the process needed to support customer growth and development.”

The BNSF program allows the certified sites to use the “BNSF Certified Sites” distinction in marketing materials to attract new businesses. BNSF actively markets the sites on its website and promotes the sites to the economic development industry across the country.

A customer who builds a new rail-served facility on a BNSF Certified Site is expected to save between six to nine months of construction time as a result of the site’s advanced level of preparedness for development. To be considered a certified site, industrial sites agree to submit documentation that allows BNSF to look at tangible evidence of a commitment by the owner and the community to develop a high-quality industrial park or site that is strongly supported by a public-private collaboration and existing investments.

BNSF launched its Site Certification Program in March 2016 by selecting four industrial sites in Shafter, California; Newton, Kansas; Shelby, Montana and Temple, Texas. As a result of these initial site certifications, BNSF has not only received inquiries about these sites from potential customers, but also from other communities that are interested in having an industrial site certified.

Factors known to be critical for a commercial development project include a true picture of property size and boundaries, the confirmed availability of utilities, public services, highway access, proper zoning for industrial usage and transparency of current land ownership. Not only does BNSF complete an analysis of those factors to ensure the sites match the desired economic development readiness level, but BNSF also vets assessments on environmental issues, geotechnical reviews, and endangered species considerations or cultural matters such as land with known archeological value – all to be confident of a good fit with rail expansion.

Additional details on the new group of BNSF Certified Sites are as follows:

• AgriTech Park is planned to eventually contain 1,100 acres. The site being certified at this time is approximately 197 acres and is located in north central Montana about 10 miles off Interstate 15 in Great Falls, Mont. It is about 225 miles north of Billings, Mont. and 110 miles south of the Canadian border.

• Ameripointe Logistics Park has more than 1,200 acres of developable land. The site being certified at this time is specific to 1,026 acres. The hub is located in Ardmore, Okla., which is at the intersection of Interstate Highway 35 and US Highway 70 about 100 miles south of Oklahoma City.

• Commerce Center of Southeast Iowa is an approximately 153 acre site located on the northern edge of the Iowa Army Ammunition Plant in Middletown, Iowa just south of U.S. Highway 34 about 90 miles southwest of the Quad Cities Metropolitan Area.

• Gallup Energy Logistics Park is expected to eventually comprise as much as 2,500 acres. The site being certified at this time is specific to 365 acres and is located a few miles north of Interstate Highway 40 in Gallup, N.M., which is 140 miles west of Albuquerque, N.M. and 190 miles east of Flagstaff, Ariz. 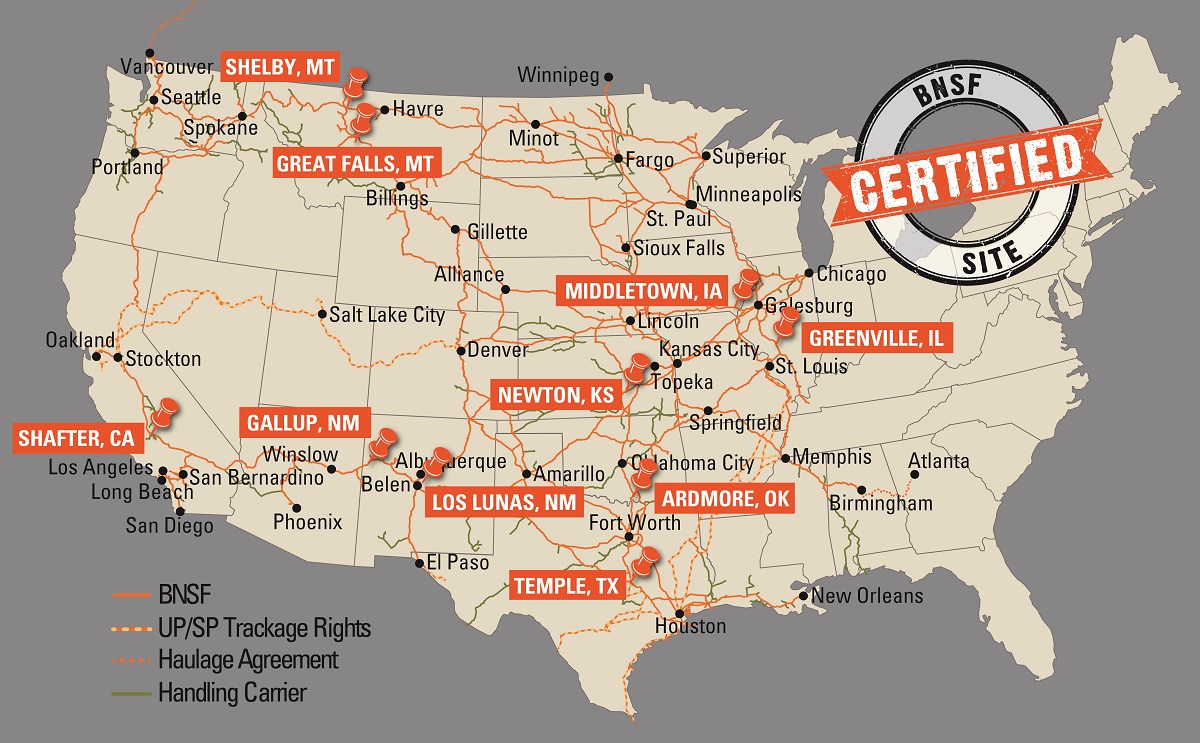