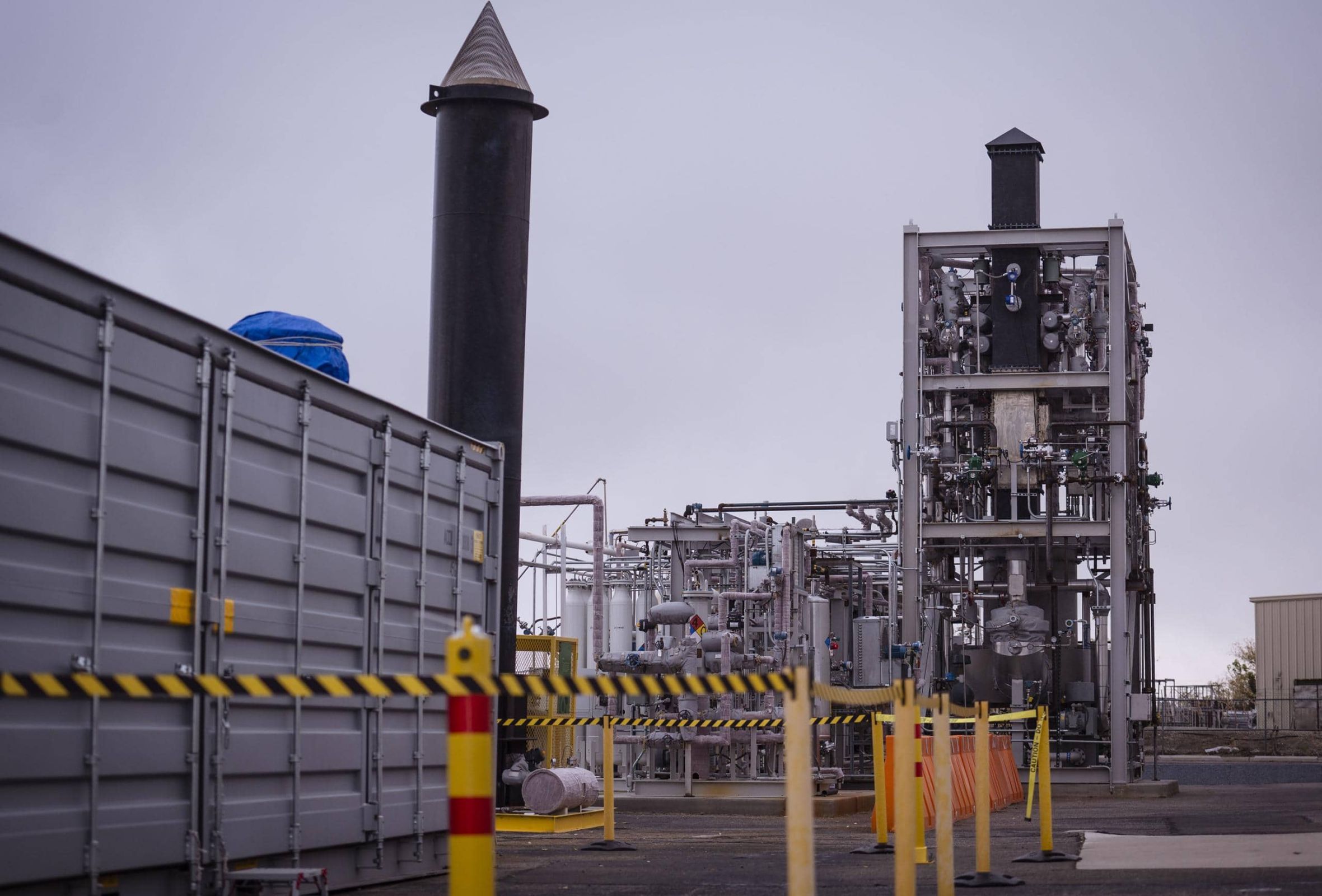 New Mexico and three neighboring states remain in the race to win federal funding for a regional hydrogen hub after receiving a favorable assessment of their initial proposal.

The U.S. Department of Energy issued its first responses Dec. 22 regarding proposals, or “concept papers,” that states submitted in early November to compete for a slice of $7 billion in new federal money to build hydrogen hubs around the country. Of 79 project proposals submitted, the DOE “encouraged” 33 of them to continue pursuing their applications. The other 46 prospective applicants were “discouraged” from preparing a full funding proposal.

New Mexico – together with Colorado, Utah and Wyoming – are among 33 project developers now “encouraged” to continue with their “Western Inter-State Hydrogen Hub” initiative, which the four states formed as a joint partnership in February. WISHH members will now develop a detailed application about their collective plans for submission to the DOE in April, which could lead to up to $1.25 billion in federal funding for the initiative. The first grant awards will be announced next summer, said state Environment Department Secretary James Kenney, who is working with the Economic Development and Energy, Minerals and Natural Resources department heads to advance the WISHH proposal in cooperation with officials from the other states.

“We now have 32 competitors,” Kenney said. “If they further downsize the list, I think we’ll still be in the mix, because I believe we have an excellent and compelling application for funding.”

The participating WISHH states released their concept paper – albeit with redactions regarding some individual project details and companies involved – in mid-November. Overall, the proposal outlines eight specific “anchor” projects for producing and using hydrogen in the four-state region, with three located in New Mexico and a fourth cross- border project that would include the state’s northwestern region.

Among the New Mexico-based projects are:

Together, the eight anchor projects would produce at least 1,000 metric tons of hydrogen per day once operational. That would supply a wide variety of end uses, including everything from electric generation and clean transportation to powering up hard-to-decarbonize industrial sectors like steel production.

The initiative also calls for broad hydrogen-related infrastructure development, such as new dedicated hydrogen pipelines and underground and surface-based storage facilities. The WISHH partners are also working with more than 100 companies that expressed interest in establishing hydrogen-related product and service businesses throughout the four states.

“We think of it like building a mall, where the anchor tenants are like a Macy’s,” Kenney said. “The anchors help to attract many additional companies interested in building out the mall to create a broad, sustainable hydrogen economy.”

It’s not yet clear if federal funding will be specifically earmarked for projects included in DOE-approved proposals, or if awardees can choose how to distribute money from grants.

“We hope we’ll be allowed to allocate money based on our knowledge of our own needs and local economies,” Kenney said.

The federal funding – included in the bipartisan infrastructure law approved last year – will attract many billions more in private investment, since all grants require matching funds. The 33 firms now on DOE’s “encouraged” list have requested a total of $33.5 billion. That’s far more than the $7 billion available, but taken together, it represents $96 billion in private investment when counting matching funds and additional project costs, according to DOE.

All federal grants come with strict guidelines, such as demonstrating sustainable environmental and community benefits, including workforce training and investment in underserved communities.

“Our plan addressed all of the critical components needed to establish a regional hydrogen hub,” Maez told the Journal. “That demonstrates the real strength of our concept paper.”

If WISHH wins federal funding, it will help many projects already in the works to move forward, such as the Southwest Clean Freight Corridor, said Libertad Power managing partner Joe Merlino.

“We’re very pleased with the progress so far under the WISHH initiative and New Mexico’s involvement in it,” Merlino said. “Gov. Michelle Lujan Grisham and Cabinet secretaries like Kenney have shown real leadership in moving this forward.”

Dec 12 2022
GALLUP, N.M., Dec. 09, 2022 (GLOBE NEWSWIRE) -- Gallup Land Partners, LLC has sold 571 acres of land in Gallup, New Mexico, to the Navajo Nation. This parcel, which borders the City of Gallup, New Mexico, is being considered as a site for the new Gallup Indian Medical Center an...Continue Reading

Dec 6 2022
The term “hero” gets bandied about these days. But, in such cases as Hiroshi “Hershey” Miyamura, the word doesn’t begin to describe his service. As we drive by flags lowered to half staff next week, we should remember to honor Gallup’s native son. Born in the “Heart of Indian Country” 97 year...Continue Reading

Nov 15 2022
New Mexico is now one of four Western states that, together, have formally entered the race to win up to $1.25 billion in federal funding to build a regional “hydrogen hub.” In February, New Mexico partnered with Colorado, Utah and Wyoming to form a collaborative initiative to jointly compete for ...Continue Reading