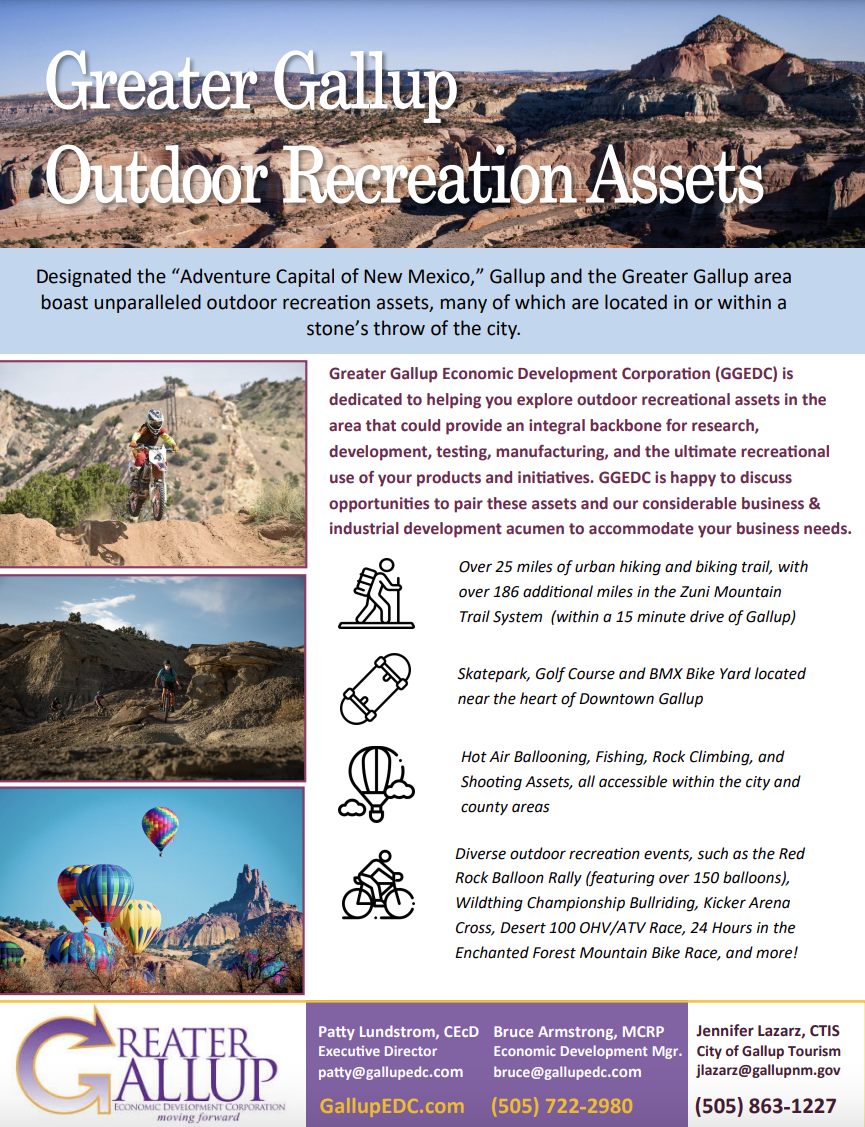 Gallup, New Mexico most famously known as the ‘Indian Jewelry Capital of the World’, hosts thousands of visitors every year who come to shop and to experience the local Navajo and Zuni cultures in terms of their arts and their history. Visitors also come to experience historic Route 66, which runs down the center of town and is lined with historic businesses such as restaurants and motels from the heyday of the "Mother Road”.

Gallup has 23 public parks, a public swimming pool, 12 tennis courts, an ATV park, and one 18-hole golf course. There is also a facility for rock climbing and a shooting range.

Beyond Gallup, adventurous locals and visitors take to the numerous biking and hiking

trails located in Red Rock Park, the Cibola National Forest and the Zuni Mountains.There are also museums of interest, including the Navajo Nation's museum in nearby Window Rock, AZ, and the A'shiwi A'wan Museum located in the Pueblo of Zuni.

The abundance of recreational activities and events has resulted in Gallup being designated as the ‘Adventure Capital of New Mexico’. Read the latest article on recreation in Great Gallup here.

Experience authentic traditional dances from a variety of area tribes, featuring traditional drum, rattle and flute instruments along with explanations regarding the cultural traditions that surround these dances.

Every August, Gallup hosts Native Americans from across the United States in a massive Inter-tribal ceremonial. The Indoor/Outdoor Marketplace and the Ceremonial Showroom present the country’s most complete and varied displays of genuine Indian fine arts, including Navajo rugs, katsinas, jewelry, pottery and basketry. Socials, rodeos and parades round out the events.

41 miles of trails in the Cibola National Forest, Zuni Mountains, and the High Desert Trail System, combined with trails at Red Rock Park offer scenic views at every turn.

Gallup is famous for its rodeos and the entertainment they provide. Annually in June, Gallup hosts the State’s largest amateur event, the Lions Club Rodeo.

The first weekend of December brings color and excitement to the red sandstone blu!s and canyons of Gallup, New Mexico as 200 balloons from around the world take flight from this spectacular setting.

The legendary road which John Steinbeck called, “the Mother Road, the road of flight”, is the nation’s most famous highway. Crossing eight states and covering over 2,400 miles, Route 66 officially opened on November 11, 1926. Starting in Chicago ending in Los Angeles, Route 66 crossed New Mexico from Tucumcari to Gallup and changed the state forever.

Founded in 1881 as a headquarters for the southern transcontinental rail route, Gallup has become the gateway to the Native American cultural experience and a center for Native American arts. Visit on of our local museums to learn more about Gallup history, Native American art & culture as well as the Navajo Code Talkers!