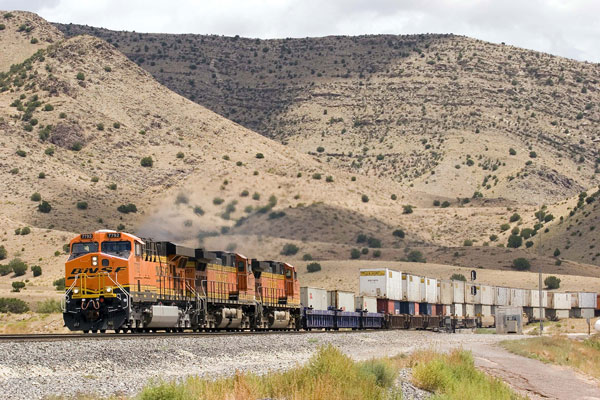 Mark Szakonyi | JOC.com - U.S. intermodal service doesn’t appear to have improved significantly since severe winter weather and rising traffic crippled most rail networks and disrupted shipper supply chains in the first four months of the year. Indeed, just as some railroads were making incremental improvements to service and digging out from the lingering winter cargo backlog, they got hit with a surge of volume as importers accelerated shipments ahead of the June 30 expiration of the West Coast longshore labor contract, said Larry Gross, a senior consultant at research firm FTR Associates.

But if volume growth is any indication, shippers aren’t upset enough about the lack of improvement in average intermodal train speeds — an indicator of overall service — to shift loads back to the highway. Intermodal volume in April jumped more than 10 percent year-over-year, with international traffic rocketing up 11.5 percent and domestic volume rising 9 percent, said Gross, quoting Intermodal Association of North America statistics. The international spurt — which reverses a months-long trend in which domestic traffic propped up overall intermodal growth — is a strong indication that shippers are accelerating imports to avoid potential disruption during contract talks between West Coast waterfront employers and the International Longshore and Warehouse Union.

About half of the 100 shippers surveyed by Wolfe Research in March and April said they have sped up inbound shipments ahead of the expiration of the contract between the ILWU and Pacific Maritime Association. Opinion within the industry is divided about whether the ILWU will slow or halt imports amid contract negotiations, although negotiations started on a positive note this month.

The surge in volume from the U.S. West Coast has wiped out improvements the railroads had made in increasing intermodal train speeds. Intermodal train speeds on a four-week average were 29.2 mph in the week ending May 16, compared with a 31.2-mph average in the same period last year, Gross said. The statistics include train speeds for all the U.S. and Canadian Class I railroads except Canadian Pacific Railway.

Falling intermodal train speeds and a rise in dwell times at railyards suggests increased schedule unreliability, said Jason Kuehn, associate partner at New York-based transportation consulting firm Oliver Wyman. Average dwell times among the seven Class I railroads have fluctuated for some while remaining generally consistent for others. However, because their time-sensitive nature warrants a preference for intermodal trains and because dwell time statistics include carloads, it’s difficult to decipher just how reliable intermodal networks are. Kuehn said intermodal service is generally improving, but there have been backward steps along the way.

Congestion on BNSF’s northern corridor, resulting from increased shipments to and from the Bakken shale region and healthy grain exports, likely contributed to the slower train speeds. CSX and BNSF also may be experiencing more severe upticks in intermodal and carload cargo than their Class I counterparts. Coal volumes, for example, have risen steadily as utilities restock their inventories following the winter.

BNSF said its intermodal on-time performance has been steadily improving across its network, with performance 25 basis points higher in the week ending May 20 than the railroad’s baseline week in early February. The railroad has moved more than 200,000 units weekly over the past four weeks, the largest four-week volume increase since mid-November, said spokesman Amy Casas.

“Our service indicators continue trending in a positive direction,” she said. “To date, we have added more than 2,000 new employees across our network, deploying additional locomotives, temporarily reassigning field supervisors from across the system to assist in restoring velocity, and incorporating improved processes around customer response.”

Slightly slower intermodal trains shouldn’t wreak havoc on shippers’ supply chains as long as carriers inform their customers — accurately —  about when to expect their goods. Besides, the difference in train speeds for the 2,100-mile haul between Los Angeles and Chicago means shipments arrive about five hours later than they did a year ago — not a shipper deal-breaker.

In fact, shippers prize reliability over pure speed: Earlier-than-expected delivery forces them to store their goods longer in warehouses, and late deliveries can result in the shutting down of production lines or empty retail shelves. “By itself, slower trains speeds are not an issue, but they are a proxy of congestion and variability of reliability,” Gross said.

May 29 2014
Dan Mayfield | Albuquerque Business First - On Thursday, Virgin Galactic and Spaceport New Mexico signed an agreement that clears the path for commercial flights of Virgin’s spaceship in New Mexico. The new agreement, with Virgin, the FAA, aabar Investments PJS, and Spaceport America spells out how the FAA in Albuquerqu...Continue Reading

May 21 2014
Gary Gerew | Albuquerque Business First - The New Mexico Spaceport Authority has received gold status from the U.S Green Building Council for its energy-efficient design and construction efforts. The certification was given to the authority for its 110,000 square-foot “Gateway to Space” terminal hangar building at Spaceport America. The building wa...Continue Reading